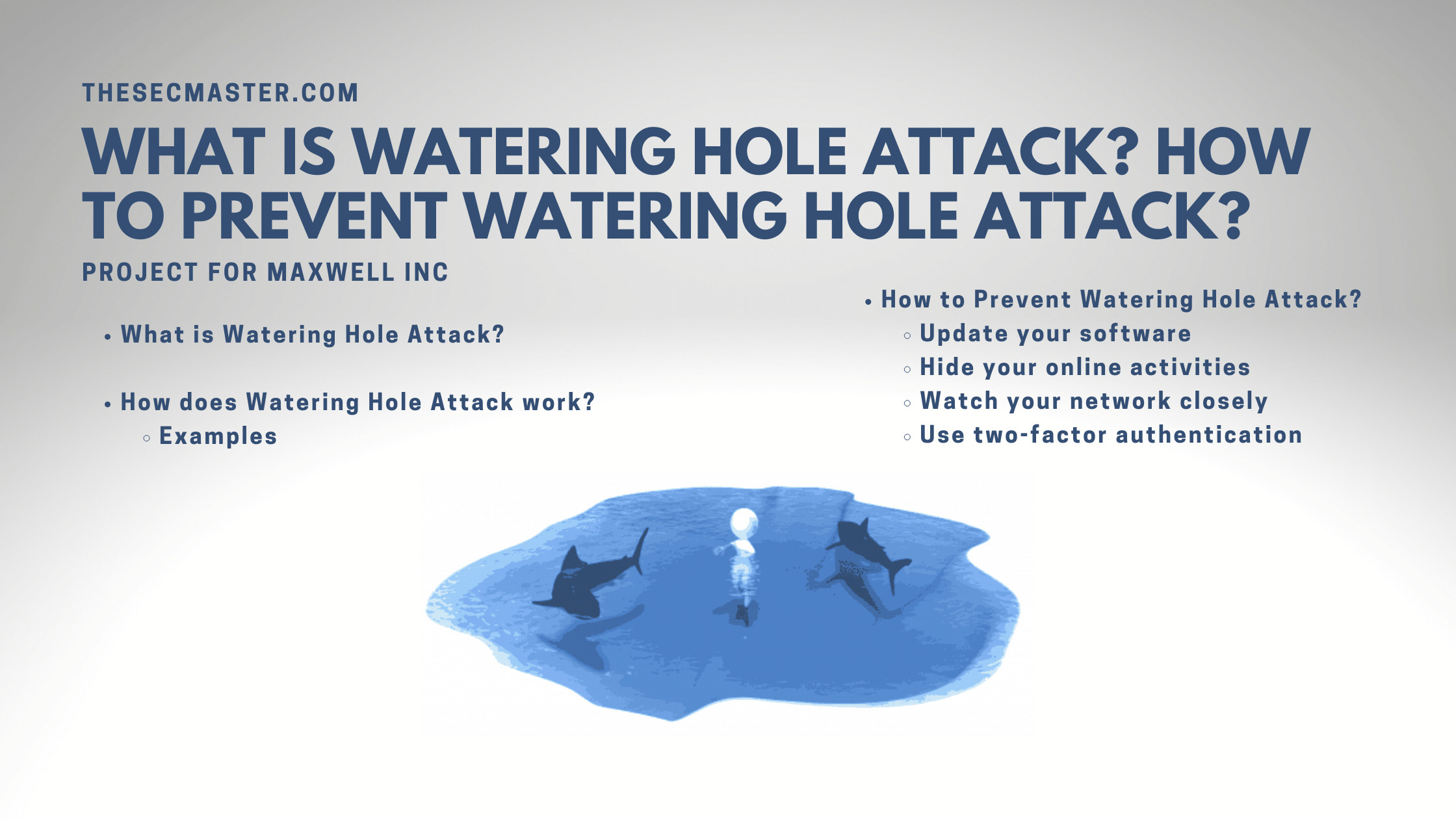 Cybercriminals are getting creative and sophisticated with their illegal activities, which means the responsibility is on the computer users to prevent themselves from cyber attacks. The first and foremost step to stay ahead of the game is to learn more about these cyberattacks. Cybersecurity is of great concern in all industries where digital systems have become a part of the working environment.

The widespread use of digital systems makes organizations vulnerable to malicious threats that cybercriminals use to steal critical business data. They hardly get noticed and operate subtly. In watering hole attack attacker places an attack in a centralized place such as web site where the victims will come by there own to become the victim of the attack. In this article, let’s have a look at watering hole attacks, how it works, and ways to prevent it.

What Is Watering Hole Attack?

A watering hole attack is a technique hackers used to compromise a specific group of end-users by infecting existing websites or creating a new one that would attract them. These are used to distribute malware onto the target’s devices, just like phishing activities are conducted. The malware used in this attack often collects the target’s sensitive information and sends it to the attacker’s server. In extreme cases, the attacker actively takes control of the infected systems.

However, watering hole attacks are not common but pose a significant threat. Since they are hard to detect and generally target highly secure organizations using their less security-conscious employees or business partners. As these attacks can breach multiple layers of security, they can be extremely devastating. A watering hole attack is a type of social engineering attack used to hack compromised websites.

How Does Watering Hole Attack Work?

A watering hole attack includes a chain of events started by a hacker to gain access to a victim’s system. However, the hacker does not attack the victim directly. Most of us provide our tracking information unconsciously while searching on the Internet, be it for personal or professional purposes. This information lets hackers form a picture of your web behavior and further information about the security policies, procedures, and protocols of their organizations.

Here are the steps an attacker uses to conduct a watering hole attack.

Here are some of the most common examples of watering hole attacks.

In this event, attackers focused on legitimate sites in specific geographic regions which they thought would be frequently used by organizations they desired to attack. Users from the targeted organization went to the fake watering hole website and then redirected to an exploited site using a malicious Javascript link. It was discovered that during this attack, over 32,000 users visited the watering hole malicious site affecting 4,000 organizations across federal, state, defense, educational, and tech sectors.

In 2015, hackers based in China used a watering hole attack to compromise the prestigious business website, Forbes. During this attack, criminals took advantage of the existing zero-day vulnerabilities in Adobe’s Flash and Microsoft’s Internet Explorer to create a malicious version of the Forbes “Thought of the Day” feature. Financial service and defense industries were particularly targeted by the watering hole attack.

● A watering hole attack aims to infect the target’s system and gain access to a connected corporate network.

● Attackers can spy and monitor the activities of the target organization. Since they successfully infiltrated the target’s organization network, they can initiate attacks that can be devastating to the organization’s operations, such as deleting or modifying files with critical business information.

How To Prevent Watering Hole Attack?

You can protect yourself and your organization from a watering hole attack using the following techniques.

Watering hole attacks often exploit the vulnerabilities to infiltrate your system or network. You can significantly reduce the risk of an attack by updating your systems and software regularly. Make sure to check the developer’s site for security patches. It is recommended to hire a managed security service provider to keep your system up to date.

Attackers can create effective watering hole attacks if they compromise websites your organization frequently uses. To stay protected, you should hide your online activities using a VPN and private browsing features. Block social media sites from office networks because these are often used as share points of a link to infect websites.

Watering hole attacks work by stealing user credentials, using a two-authentication factor such as code generation makes it much harder for attackers to break into your system.