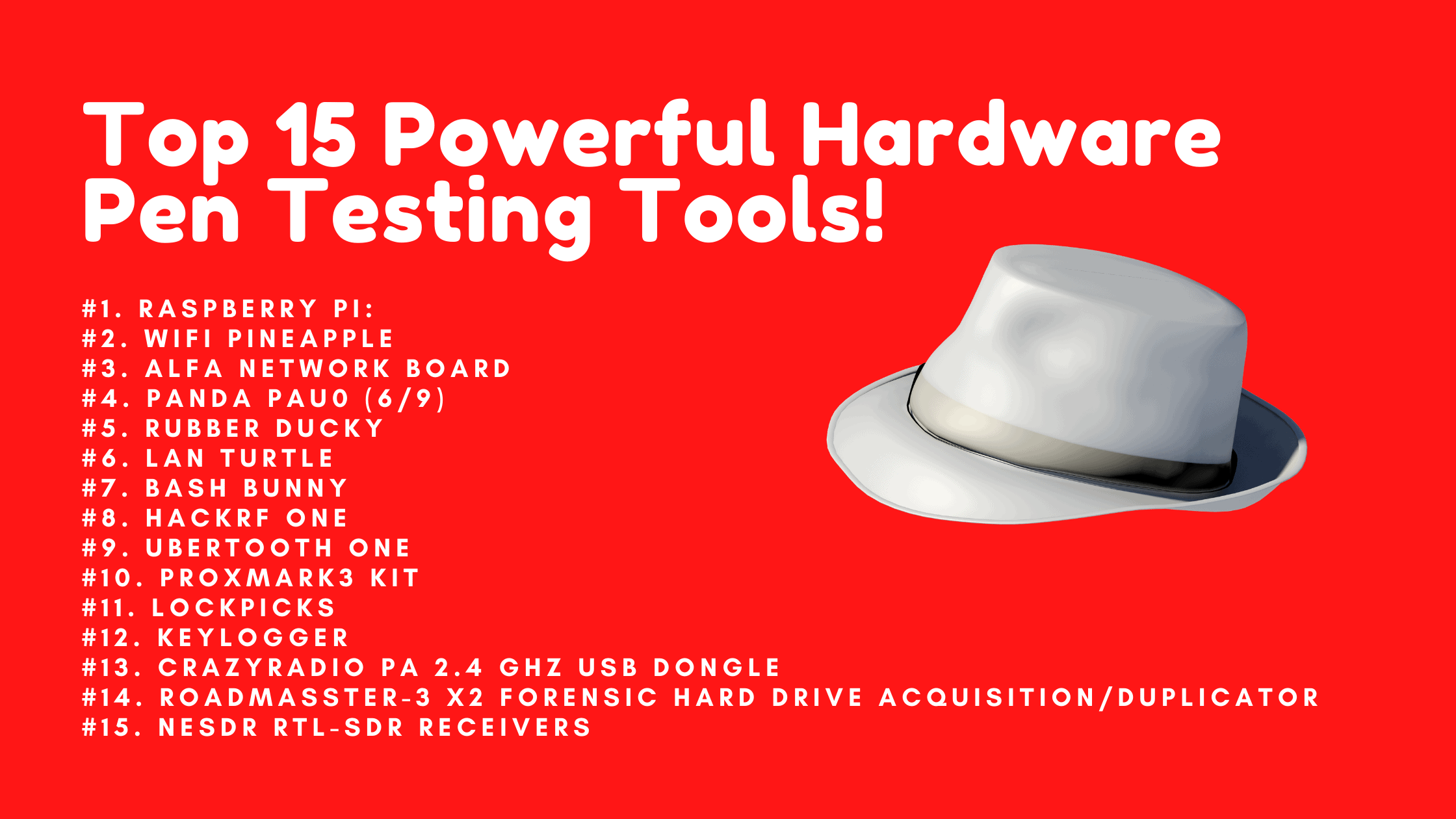 As the Cyberworld grows, the chances of an attack also grow with it. The sole purpose of having a pen test is to identify and find weaknesses in your application that may be exposed to the chance of exploitation by some foreign attacker. Penetration testing is vital and basically a need as it can save you from a possible hack and intrusion. It should be done on numerous varieties of codes and frameworks integrated into your applications. There are several software and hardware tools available to perform pen testing, but our focus is limited to share the powerful hardware pen testing tools available to perform successful pen testing in all areas.
Pen testing is essential for influential organizations as they have to protect sensitive data, which can be harmful for the organization if it gets into the wrong hands. To keep the data safe and avoid any breaches, pen testing should be performed.

No matter how advanced the technology becomes, there will always be a weakness not yet explored. Computer security experts do penetration testing, and this is the procedure by which cybersecurity specialists identify and exploit security flaws in computer systems. These specialists are also known as ethical hackers or white-hat hackers. They develop solutions for the software shortcomings by simulating attacks carried out by cyber attackers or hackers. These attackers hack the systems with criminal intent, and so they are known as black hat hackers.
In simple words, ethical hackers find out how a cyber attacker can possibly exploit your network and enable you to build a firewall against any vulnerability that might become an issue in the future.

What Is The Need for Pen Testing?

• Allows an organization to discover vulnerabilities or flaws before cyber attackers exploit them.• Allows implementing a highly effective protection measure.• Allows regulatory oversight• Uncovers the access points of your computer networks that are most vulnerable to adversary attacks.• Helps organizations in highlighting and mitigating vulnerabilities through security software.

Who Performs The Pen Testing?

A Wi-Fi Pineapple can be utilized as an unauthorized access point (AP) in man-in-the-middle (MitM) hacking attacks. Attacker use this hardware pen testing tool to create rogue Access Point and attract users to conduct man in the middle attacks and captured their credentials.

You will find a variety of Alfa Network adapters, and you will have to find the one that suits your preference the most. The chipset used in the adapters works flawlessly with different auditing apps.This Wi-Fi band is one of the most used and favorable for injecting packets. The quality of material used in the Alfa Networks makes it unique, and different models support different chipsets that Kali Linux natively supports.

Panda Pau0(6/9) is also a wireless USB adapter which is an ideal hardware pen-testing tool because of its features and fast speed. It can prevent unauthorized users that try to access your wireless network as it supports top-notch security features that are standardized. It is compatible with Linux distributions and several windows software.

Rubber ducky is a key injection hardware pen testing tool that looks fairly similar to a USB. It can be used to hack systems and identify the flaws in the system. The essential thing to note here is that Rubber Ducky is undetectable by Firewall, Anti-Virus because it replicates an HID device.

The Bash Bunny is by far the most sophisticated USB attack system on the market. You can carry out hidden pen test attacks and IT optimization activities in seconds with easy code files. The Bash Bunny utilizes various network attacks from network hijacking to keystroke injection by imitating trustworthy machines such as keyboards, serial, Ethernet, and storage.

Great Scott Gadgets HackRF One is a Radio device effective in transmitting and receiving radio transmissions ranging from 1 MHz to 6 GHz. HackRF One is an open-source software framework designed to support new and next-generation radio technology testing and advancement.

The Ubertooth One is an open-source software 2.4 GHz wireless application framework that can be used to work with Bluetooth. The Ubertooth was created to be a low-cost alternate network for tracking and developing new wireless technologies, BLE and BT.

Whenever it comes to reading and copying RF Tags, the Proxmark3 is the RFID preferred tool. Proxmark3 can act autonomously from a PC and is operated by an additional 3.7 V battery, and it provides advanced functionality based on the intended RFID Tag.

Lock picking is a process when you break a lock without the original key and also without completely destroying the lock. Lock picking is essential in pen testing as it identifies the physical vulnerabilities of the security systems.

Keylogger is also considered a powerful hardware pen testing tool. Hardware keyloggers look more or less like typical small size USB pen drives. These devices sit right between your computer and keyboard to intercept the key signals that you enter on the keyboard. It’s easy to detect if you pay a little attention to all your external USB ports.

The Crazyradio PA is a long-range free USB radio adapter built on Nordic Semiconductor. It has a 20dBm amplifier, an LNA, and is pre-programmed with Crazyflie software.

The RoadMASSter-3 X2 is a portable forensic lab developed as a high-speed technical data collection and research workspace. It is among the most sophisticated computer forensic instruments in the industry. The RoadMASSter-3 X2 is outfitted with all of the equipment required to capture information from drives using modern drive interface software.

The RTL-SDR is a USB dongle that can work as a computer-based radio sensor to receive live radio signals in your region without the internet. Based on the type, it could acquire frequencies ranging from 500 kHz to 1.75 GHz. The majority of RTL-SDR software is now developed by the community and is freely available.

• Can listen to amateur radio hams with modulations of LSB/USB.• Are compatible with all RTL-SDR software packages.

Pen testing is essential and for the better security of your systems, so you should get it performed over time. Mentioned above are some of the powerful hardware pen testing tools in the market, which you can choose from according to your requirements, preference, and budget.
Thanks for reading this article. If you find this interesting, please visit our website to read more such articles.