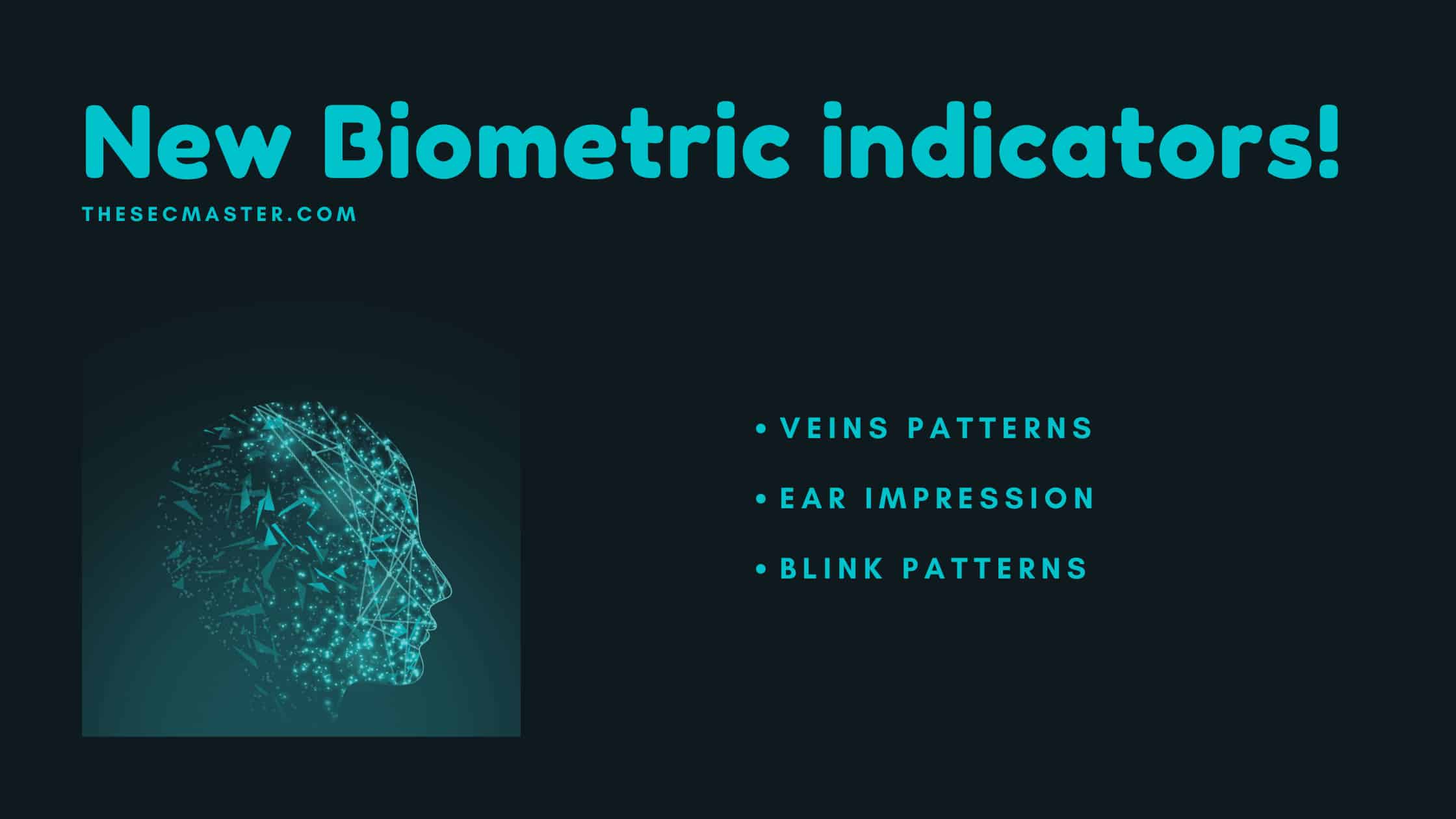 Biometric indicators are used to uniquely identify people and allow access to buildings, facilities, and systems. Biometric authentication is widespread and is even used in smartphones, ATM kiosks, banks, airports, hospitals, and office complexes. The biometric modes in use include fingerprints, faces, voice signals, eyes, ears, DNA profiles, EEG, and ECG signals. Most of the people know until here. What is next? What new identifications are making up the list? The whole purpose of writing this post is to share the new biometric indicators which are going to be used as credentials in the foreseeable future. Be aware of these new biometric indicators.

For a biometric indicator to be useful, it has to have certain characteristics, namely universality, uniqueness, permanence, collectability, performance, acceptability, and circumvention. Here permanence means a lack of variation across life so that the indicator should not change between a baby and an old man. A fingerprint will not, but the individual’s voice most certainly will.

Performance is how good the biometric indicator is in real-world use. In theory, iris recognition is great, but in practice, because of the low quality of imaging systems, it is very unreliable and often locks people out. Collectability is the ease at which the particular indicator can be measured. While it may be easy to recognize facial characteristics through any available video camera, it is considerably more painstaking to use DNA-based biometric authenticators. Out of all these, DNA has been considered to be the most secure, but it is possible in theory to gather and amplify DNA or even engineer new DNA and then use it to bypass the authentication, so none of the modes are considered foolproof.

To make existing systems more secure, one of the approaches is to use multimodal authentication techniques. This means that a fingerprint is checked in tandem with the iris. Any new biometric indicator would have to be

easy to collect, integrate into multimodal systems, and preferably be able to run off your smartphone with all the data stored locally.

Knowing something as good as the back of your hand is actually a misleading statement, as the back of the hand is one of the most complicated parts in the human body. There are all Sorts of crisscrossing tendons, veins,

muscles, and fourteen bones in each hand. As the human body grows, the venation pattern in each individual’s hands are unique, and this can be potentially captured and read by existing multimodal systems that, for

example, check for fingerprints, palmprints, and hand geometry all through a single “hand scan”.

Researchers from the University at Buffalo have used photoacoustic tomography to make a three-dimensional map of the veins in the hands of an individual and then use it to match against a saved sample. The approach uses a combination of both light and sound. First, laser probes are used to illuminate a finger. When the beam touches the veins, it makes a “poof” which is then picked up by an ultrasound detector. The combined data is used to reconstruct a three-dimensional map of the veins in the person’s hand. The entire setup integrates the acoustic and light windows and has an imaging window similar to that of conventional hand scanners. The system is expected to be used in critical facilities such as bans and military bases.

The specific morphologies of the ear are as unique to each individual as fingerprints, and in fact, there are police databases around the world that keep records of ear impressions of violent criminals. The approach even predates the use of fingerprints to identify people by about a century. And was actually used way back in Johann Kaspar Lavater, an eighteenth century Swiss poet and physiognomist. Lavater began the field of oatomorphology by using ear patterns to distinguish between people. He even went a step ahead and claimed that by precise measurements of a predict criminal behavior!

This old and obscure idea of using ears as a biometric indicator has found new applications in the era of touchscreen smartphones. This is because the ears are a part of the natural motion of using the phone, and the

the action of taking a call can be used to unlock the phone.

Ergo by Descartes Biometrics is a security solution that does just this. The interface for biometric identification is the touchscreen itself, as each ear has unique touchpoints. The app can be made more sensitive or less sensitive, which is a trade-off on convenience. There is no additional hardware required, and the profile for the recognition is stored locally on the device itself.

Blink Fish originally started as a game where you blink to make a fish jump at just the right timings, threw in a video recording mode, and became a rage on TikTok. The app works because smartphones already have the capability to capture and track at least some of the wide range of movements and actions used by your eyes and use them as inputs.

Going forward, we can expect more smartphones and X reality setups to incorporate eye actions and gestures into the ways users interact with these systems. It is not surprising that a person’s eyes, ears, nose, chin, and shape of the face, he could even researchers have attempted to use blink patterns as a new biometric indicator. Note here that although the mode of access is biometric, in practice has some similarities to entering a PIN code and is not entirely dependent on a passive reading, but there are characteristics observed that are uniquely personal in the process.

Essentially, the individual who wishes to access the device has to first trigger the playback of the song and then. To put it in non-technical terms, blink to the beat. The individual is free to choose their own blink patterns. The software system can then match the blinks on a new unlock attempt to the pattern stored on the file.

This is a strange authentication mechanism as it is immune to shoulder surfing, but someone looking straight at your face and not at the screen can catch the pattern. However, there is a second layer of authentication, one that compares the individual characteristics of the blink itself to what is known as a personal “blinkprint” saved on file.

The technology has been developed by researchers from Georgia Tech. This is one of the contact-free biometric authentication methods that may be particularly useful in a post COVID world.

This is not the end; as time passes, more things will be discovered. However, we are closing this post hoping that we have served with some great information.

Thanks for reading this article. Please share this with the people who are interested in reading such topics.