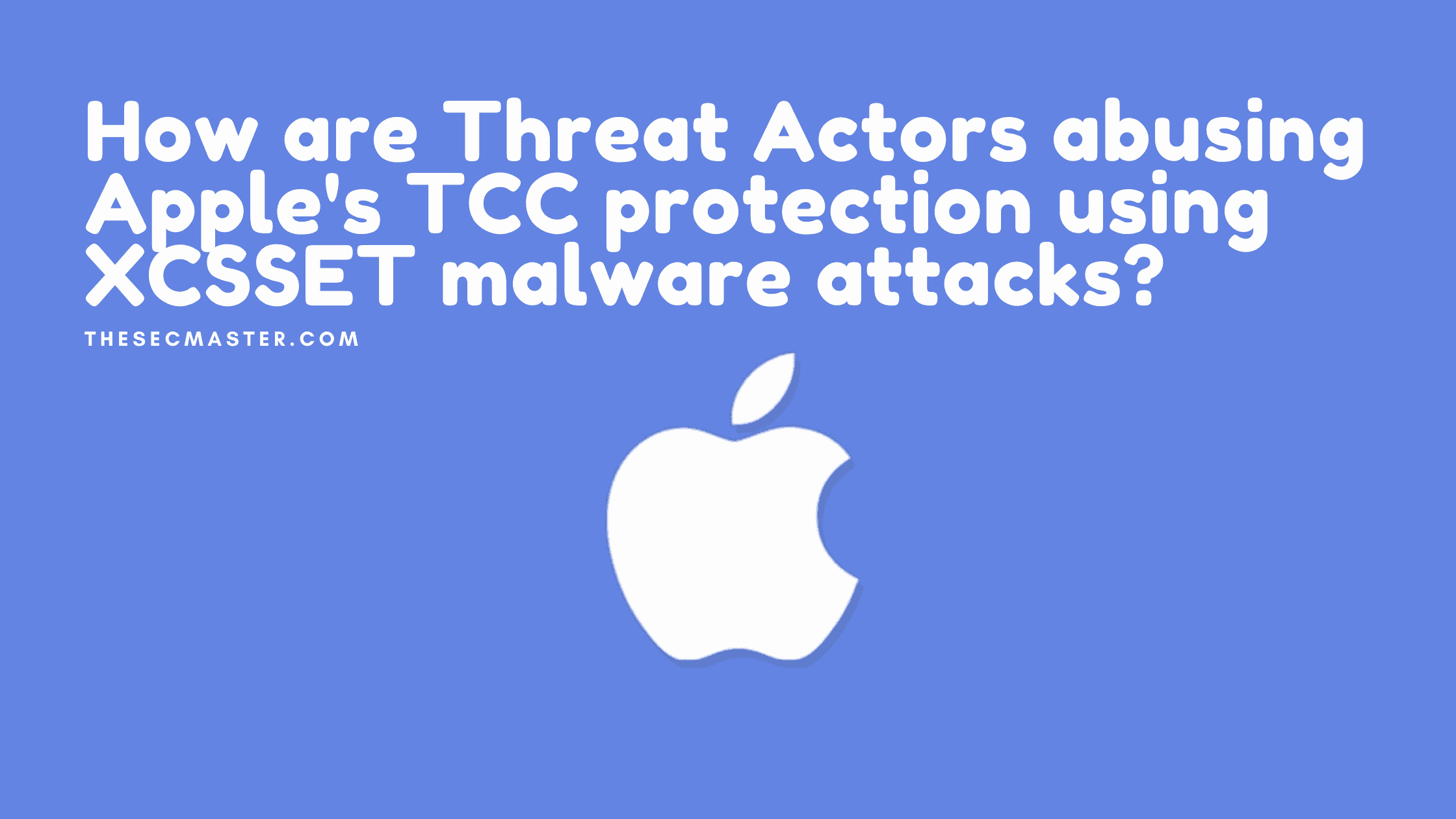 Apple Releases Patches to Counter New Zero-day XCSSET Malware Attacks on macOS Apple has recently released security updates for macOS, tcOS, watchOS, iOS, and Safari web browser to fix several vulnerabilities, including an actively exploited zero-day vulnerability in macOS. This critical bug in macOS could be manipulated to take screenshots of someone’s system and take images of their activities without the person knowing it.

The company recognized that the XCSSET malware attacks were used to access the macOS privacy protection. Apple said that it knows that the security problems may have been actively manipulated. However, it neither provided attack details nor the threat actors’ information who may have exploited zero-day attacks.

According to Bleeping Computer, there are three cases when the tech giant Apple has experienced vulnerability issues. Two of these zero-day attacks, CVE-2021-30663, and CVE-2021-30665, affected the WebKit of Apple TV 4K and TV HD devices. However, the third zero-day attack, CV-2021-30713, impacted the macOS Big Sur devices, and there is a permission problem found in the TCC framework.

What Do We Know About XCSSET Malware Attacks?

In August 2020, Trend Micro revealed a new strain of XCSSET malware. It was developed and written in AppleScript, a scripting language developed by Apple. It provides control over the script-enabled Mac application.

Who Is The Primary Target Of XCSSET Malware Attacks?

According to Trend Micro, the malware can steal information associated with the applications, including Evernote, Notes, Telegram, QQ, Skype, and WeChat applications. It can also launch Universal Cross-site Scripting attacks to inject malicious JavaScript code into the browser and change the user’s browser experience. XCSSET attack allows the malware to replace cryptocurrency addresses and steal the login credentials for online services. These include Apple ID, amoCRM, Paypal, Google, Yandex, and SIPMarket.

What Is TCC Protection?

The Transparency, Consent, and Control (TCC) framework is a macOS subsystem that blocks the installed applications from accessing the user’s sensitive information without asking permissions explicitly through a pop-up message. An example of active TCC is storing files in the documents directory, recording keystrokes, and capturing screenshots. When an application tries to perform such actions, a prompt is shown to the user asking whether to grant or deny permissions.

In some cases, users are required to authorize permissions to the applications. Upon granting permissions, they are now free to act without asking the user until they manually disable it in the privacy settings. Attackers can exploit this vulnerability by using malicious applications to bypass user privacy preferences and access sensitive data. Jamf researchers found that macOS zero-day vulnerability was used by the XCSSET malware attack to avoid Apple’s TCC protections designed to protect the user’s privacy.

While Apple did not give details about the zero-day attacks, Jamf researchers found that the patched macOS zero-day, CV-2021-30713, was used by the threat actors to target the Bypass TCC protection developed to protect user privacy.

The XCSSET malware has been found in the Xcode projects leading to a tight spot of malicious payloads. Xcode is an integrated development environment (IDE) to develop Apple-related applications and software. Unusual infection in the developer’s project included the discovery of zero-day vulnerabilities. These Xcode projects have been modified. For example, on building, these projects run a malicious code that eventually leads to the XCSSET malware attack being run on the affected machine.

The second vulnerability is due to how Safari WebKit operates. Generally, launching a kit requires the user to submit a password. But a bypass was discovered that could be used to perform malicious tasks through the un-sandboxed Safari browser, which appears to perform hijacking.

The Indicators Of Compromise (IoCs) Associated With XCSSET Malware Attacks

During research conducted by Jamf, they found multiple hashes that were unidentified by Virus Toral previously. Apple’s built-in malware detector, XProtect, already detected some of the hashes discovered by Jamf. However, additional hashes identified by the Jamf team as being the XCSSET malware found their way to Github that compromise the affected repositories. The affected executables have been noticed as having one of the five possible filenames in the Xcode project.
Here is a list of command and control domains.

It is advisable to use trustworthy and official download sources to get rid of XCSSET malware attacks. Here are some tips you can follow.

You can avoid the XCSSET malware attacks by updating the macOS. Malwarebytes doubts that Sierra 10.12.2 includes a patch to solve this issue because up-to-date systems are less vulnerable to these kinds of attacks.