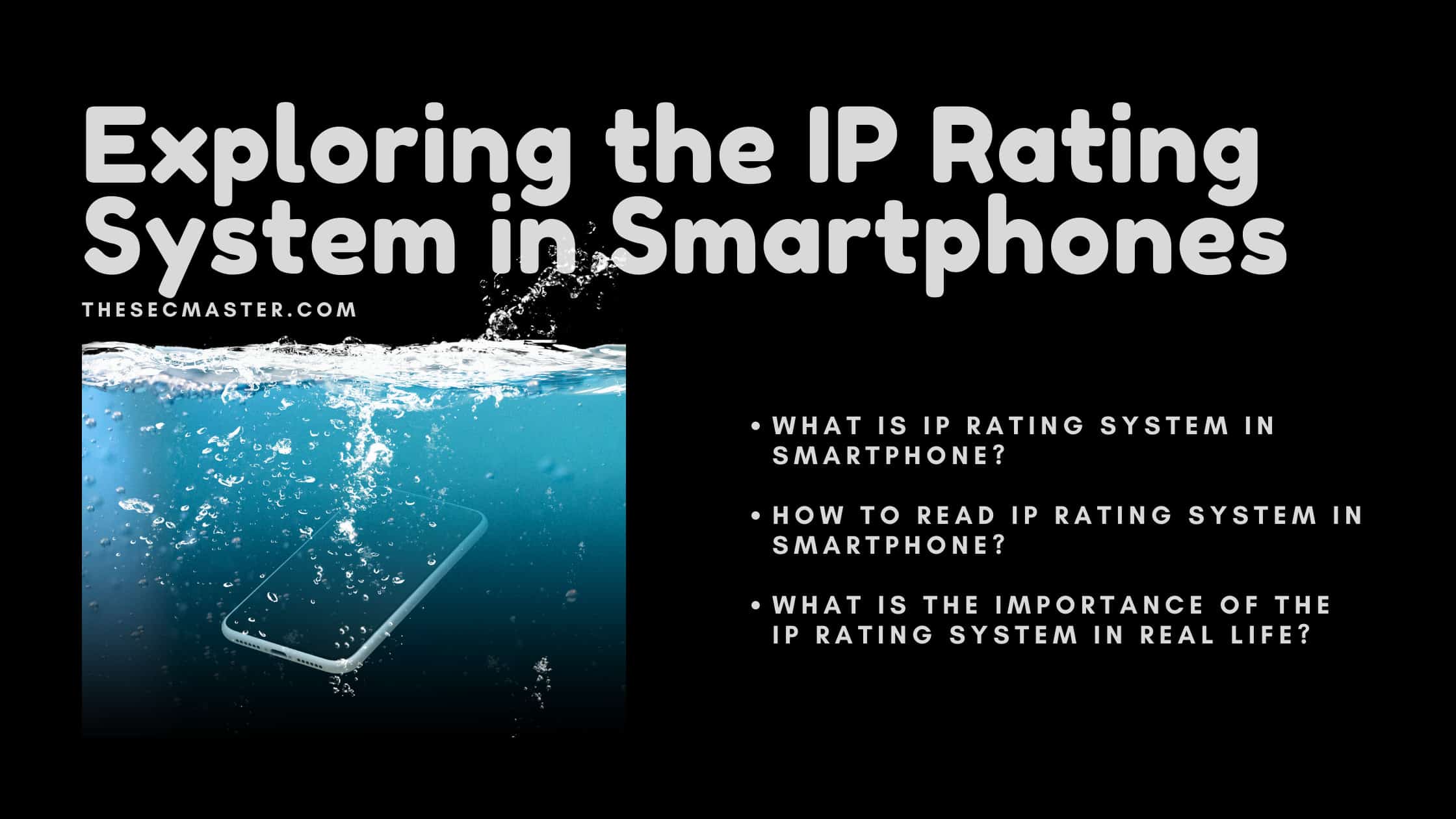 As smartphone prices are burgeoning, consumers have begun expecting more luxurious features from their smartphones. For a good reason too, especially when some smartphone enthusiasts dole out close to a lakh for premium phones! An IP rating is among one of the expectations, especially for flagship and premium smartphones, and some mid-range ones too. After all, an IP rating can prove to be the saving grace, allowing your phone to survive through unexpected showers or accidental drops into the toilet bowl. Let’s explore the IP rating system in smartphones.

Naturally, we all wish all smartphones were truly waterproof. We wouldn’t be faced with trivial worries of our phones dying out due to an accidental dunk or occasional splashes. Unfortunately, that is not the case.

In 2021, smartphones across several budget points come equipped with an IP rating, which makes them water-resistant and not waterproof. You may often see smartphone manufacturers such as Samsung, Sony, and Apple use their IP rating as one of their foremost selling points. While smartphones today are quite rugged and can probably shake off splashes and more in most instances, their water resistance isn’t as straightforward as you think and is often lost in the fine print in smartphone websites and advertisements.

Read on to find out all about the IP rating system in smartphones and why modern-day smartphones are probably not as waterproof or water-resistant as you think.

What Is IP Rating System In Smartphone?

If a smartphone manufacturer markets a phone as being water-resistant or waterproof, chances are the smartphone supports an IP rating. If you follow smartphone releases, you will know that this rating has something to do with protection against dust and water. However, there’s much more to this than meets the eye. ‘lP’ stands for Ingress Protection or International Protection. It is essentially a massive body of standards that covers not just smartphones but also other electronics, from electrical sockets (approximately IP22) to street lights (approximately IP44).

The rating codes have no hyphens or spaces and simply consist of the letters ‘IP followed by, typically, two digits. The ratings are determined by the International Electrotechnical Commission, and according to this organization, the IP rating system in smartphones is “for classifying the degrees of protection provided by the enclosures of electrical equipment” In simple words, the IP rating system in smartphones determines how well a smartphone can hold up against dust, water, and other external pollutants.

How To read IP Rating System In Smartphone?

The first digit following the ‘1P’ indicates the level of protection that the device’s enclosure provides against the entry of foreign solid objects, which could range from anything between fingers to dust particles. There are

six different levels of protection in this range. So, level 1 offers protection only against large objects while level 6 completely seals out dust from the device.

Typically. gadgets such as smartphones and tablets have IP ratings above 5 or 6 in this category. This is necessary since smartphones need to have a level of protection against solids in order to safeguard the components and to keep camera lenses free of dust. The first table below indicates the level corresponding to the type of protection it offers.

The second digit represents the degree of protection against the entry of water into the enclosure of the device, with levels ranging from O to 8. So, while levels 1 and 2 protect against varying degrees of dripping water, level 8 can handle full-fledged immersion beyond 1 meter and level 9 can handle extremely high-pressure close-range jet sprays. The second table below details the water-resistance level and the corresponding type of protection.

Using the information in these tables, you can gauge the water and dust resistance of any device. Today, we usually see smartphones sporting an IP67 or IP68 rating. Let’s break these down. In the hands of a former, the device is completely dust-tight and can be immersed into water for up to one meter for a total duration of 30 minutes. IP68, on the other hand, means that the device can be submerged even beyond 1 meter, up to the depth specified by the manufacturer. Also, while the time frame reads as ‘continuous’ here, some manufacturers still mention a time limit even if their device is rated IP68.

Additionally, if you see an ‘X’ in either part of the rating, for example, IPX5, it means the rating for, in this case, dust protection isn’t available. This doesn’t necessarily mean it does not protect against that element (dust or water) but that the manufacturer has simply not tested that area. Sounds pretty simple right? It should mean that if you get a smartphone with an IP67 or IP68 rating you are protected against water and dust exceptionally.

What Is The Importance Of The IP Rating System In Real Life?

Firstly, the IP rating system in smartphones is not cumulative. So, smartphones as well as other devices, are not required to pass every single test that leads up to the highest level of rating. While some companies do test for varying degrees of protection, achieving a high rating definitely does not require it. So, to achieve an IP67 rating, smartphones need to only ensure that they can survive submersion for up to 1 meter for a period of 30 minutes. They are usually not certified for durability against, say. powerful water jets. This kind of stress often requires a different grade of device sturdiness than what is needed for just submerging a device underwater.

Sometimes, a phone is rated for both spray and immersion, and manufacturers will grant it two IP ratings. An example is Sony’s flagship, the Xperia 1 lll, which features both IP65 and IP68 ratings. This means it can not only weather water jets but also submersion. However, this is uncommon since most phones only come sporting one IP rating, so it is tough to say whether the manufacturers have tested it for other variables.

Secondly, IP rating scores are also derived under certain simulated conditions, for water resistance. The tests are usually done with freshwater. However, seawater (saltwater) and chlorine in pools affect phones very differently. They can cause near-instant corrosion in the insides of your phone. This process is sped up even further if your phone is not spanking new.

Daily usage causes a phone to lose its integrity, bit by bit, especially if you are a frequent dropper. Even temperature fluctuations, such as being in the outdoors heat and then suddenly going into an AC-cooled room can speed the aging process of your phone. When your phone ages, even by a bit, the adhesive which bonds the glass and metal exterior and interior of your phone gets compromised. This directly impacts the IP rating and how

well a smartphone can stand up against dust and water. This is usually why almost no smartphone manufacturer provides a warranty against the dreaded water damage. Water kills phones, it is as simple as that.

Over time your smartphone, even if it is IP69 rated, will lose its IP rating due to loss of structural integrity, and if you’re not careful, it will become a victim to water damage. So, it is integral that smartphone manufacturers try to educate their users about these possibilities. Unfortunately,. that is usually not the case.

The Australian Competition & Consumer Commission (ACCC) took Samsung Australia to court over the S10 lineup’s water-resistance capabilities for “false, misleading and deceptive representations in advertising the water-resistance of various ‘Galaxy’ branded mobile phones” They believe that Samsung has repeatedly been misleading users with their advertisements since 2016 that often show people using these phones in pools and underwater in the ocean. The funny part is that Samsung mentions on their website that the phones come with IP68 water resistance and it is not advised for “pool and beach use” Yet we see ads like those from the company, which blatantly mislead consumers for economic gain.

So, is any smartphone on the market waterproof? No. Is any phone truly water-resistant? Yes, but only under optimal conditions and certainly not when it has a few bumps, bruises, and especially cracks! Since water damage is not covered under warranty, it is integral that you take the necessary precautions to keep your device as dry as possible. Manufacturers will always know if a phone is malfunctioning due to water damage since they have little ‘water contact indicator tapes that turn pink or red when they come in contact with water. Just like those litmus papers we used for experiments in school. So, to reiterate, keep your phone dry and rely on the IP rating system only for the occasional accident. Don’t become one of those cautionary tales everyone tells to warn against the mostly irreparable consequences of water damage.

Thanks for reading this article. We believe this piece of information had helped you to understand the IP Rating System in Smartphones.

If you find this information interesting, follow us on LinkedIn to stay updated.